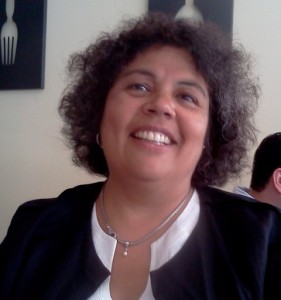 Mariam Kobras is a member of my International Beyond Busy Book Club and when she burst out with the news that she’d won a recent IPPY award, I checked out her book.

And we were all in luck, because even though Mariam lives abroad, her publisher has signed copies of her books here in the states, so one lucky commenter will win one today!

Congrats to Mariam on her IPPY! Please help me welcome her.

Born in Frankfurt, Germany, Mariam lived in Brazil and Saudi Arabia with her parents as a child before they decided to settle in Germany. She attended school there and studied American Literature and Psychology at Justus-Liebig-University in Giessen. Today she lives and writes in Hamburg, Germany, with her husband, two sons and two cats.

The storyline for The Distant Shore was inspired by her fascination with the limitations fame can impose on people. Her book explores the value of love in a world where money and a front-page photo are sometimes more important than a person’s soul. 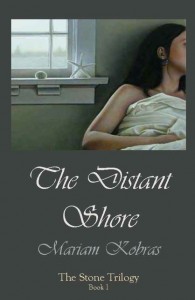 About The Distant Shore

There’s nothing like finding a letter on your breakfast table telling you there’s a teenage son you knew nothing about…but this is what happens to international rock star, Jonathon Stone. He drops everything he is doing to find the boy and his mother, Naomi—the girl he loved so many years ago and who left him when his rock ’n roll life became too much for her to bear.

Seeing her again means falling in love all over. For a while they hide in Naomi’s hotel in a Norwegian coastal village and celebrate their reunion. But Jon’s life soon calls him back, and once more Naomi follows him to Hollywood.

Everything seems perfect, but there are always jealous fans, and one of them is out to get the rockstar’s wife…

Actually quite late in life. I used to dabble a bit in writing as a teenager – the usual stuff, a journal, a story about Captain Kirk of the USS Enterprise, that kind of thing. Then I let it slip. At university, while studying American Lit., I did take some creative writing courses, and they went rather well.

But my serious writing began three years ago, when, waking up one December morning, I knew it was time. So I sat down and wrote The Distant Shore within a few months. Minutes after posting page 99 of the novel on my blog, I got a DM on twitter from Buddhapuss Ink, requesting a full manuscript. A few weeks later they offered a deal.

My husband, in his very calm and kind way. He always wanted me to write, to start earlier, but I never had the guts. For me, it was important to know there would validation for what I did. It’s as if by having my work accepted, I can justify the amount of time I spend doing it. See, deep down I’m a mom and housewife, and I feel guilty neglecting my dirty kitchen.

Now, of course, everything is different. With three book deals, one published book, one about to be released and the third nearly finished, it’s my job.

My family has adjusted to our new life.

The ladder of success – that’s a different story.

I haven’t had a long writing journey like most authors. I’ve never had to face piles of rejections, I didn’t have to write submission letters!

Overnight, I was a signed author, stumbling through the confusion of this brand new world. I had a contract, business cards, was sent on a book tour, told to write a new book, and quickly, please, and I had NO idea what I was doing.

As an author, I’m standing on the shoulders of Mary Chris Bradley of Buddhapuss Ink. She has the patience of an angel, and she pulled me up the ladder.

Oh goodness – what a question!

First of all, I haven’t had any negative responses. Well, there was one who wasn’t overly thrilled, but that person had won the book in a giveaway and only reads SciFi. My books definitely aren’t SciFi.

One comment that keeps coming back—and that I love very much—is, “poetic, lyrical”. The characters “feel real, like real people”, the “sense of setting makes me think I’m really there”. Those are the most frequent comments I get.

Readers are asking when the sequel will be out. They say they can’t wait for it. Which is great, of course!

I think I can tell you now that the next book in the Stone Trilogy, titled Under The Same Sun, is scheduled to release October 1st, this year.

The most THRILLING responses I got for The Distant Shore were the first words my publisher ever said to me, in a Skype conference: “I totally believe in your project!” Dream words, words every writer wants to hear from a publisher!

The other one would be the IPPY Award The Distant Shore has just won.

I mean, really. You wake up one morning, decide to write a novel, it gets signed off the spot, sells out within hours after its release and THEN wins an award a couple of months later. Who could ask for anything more?

Thanks for participating in the Writer Mama Every-Day-In-May Book Giveaway! I hope to see you here every day this month. Bring your friends!