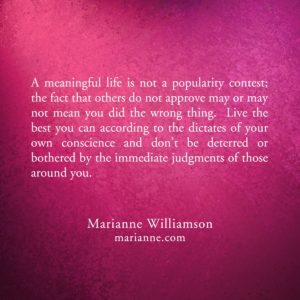 You know what keeps me going some days when the media circus just feels like too much?

My feminist coffee mugs, that’s what.

There are a lot of things and people who have kept me going over the years when events in the world seemed positively bleak. And one of those people is Marianne Williamson. Are you familiar with her work?

Marianne Williamson just gets it, when it comes to being a woman in America, and I am thrilled that she is running for President as the Democratic Candidate. (I actually like several of the Democratic candidates, so stay tuned for more on that.)

We need strong, smart, emotionally intelligent women leaders in the United States — and Marianne Williamson is such a woman.

So, I thought I would gather up a bunch of Marianne Williamson books that I highly recommend. You can usually read them or listen to them. Take a look if you are so inclined!

A must-read for every woman:

Where it all started:

For those who suffer from anxiety or depression:

We all need to read this:

This one is coming out in April!

Next post: Our Medical System Is Out Of Balance: Medical Medium Balances The Health Scale With Equal Access For All