An Interview With Jane Friedman About “The Future Of Publishing: Enigma Variations” E-book 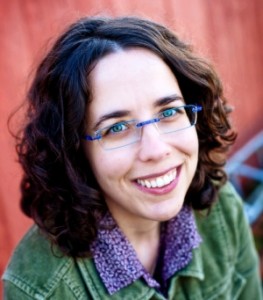 You heard it here first, if you didn’t know it already.

Former publisher and editorial director of Writer’s Digest and current visiting professor of e-media at The University of Cincinnati, Jane Friedman, knows more about publishing than your average industry authority.

I first met Jane in 2005 at the Willamette Writers Conference. I was there to wow her with my verbal book pitch, which I stood up and gave to her and a panel of industry gatekeepers the way most writers do, with my hands shaking and my pulse racing.

And on that fateful day a book (Writer Mama—the title was Jane’s idea and ten times better than the title I pitched) was born. But more importantly, a friendship commenced.

Over the past five and a half years, I have never ceased to be amazed by the depth and thoughtfulness of Jane’s intelligence and perceptiveness. She has taught me a great deal about publishing, more in fact, than I ever intended to learn over these years.

At some point, it occurred to me that more people should really be listening to her insights and heeding her wisdom. So, I did what any friend would do: I dared her to write this e-book.

Secretly and, I suppose, not so secretly, I wanted everyone who didn’t already know how informed Jane is to get a demonstration of the wit and wisdom that I have been benefiting from all of these years.

And so, Jane took me up on it. She wrote “The Future Of Publishing: Enigma Variations” in record time, with a little help from some of her friends, and putting much of her own advice for writers into action.

I think you will be amazed, entertained, and possibly even enchanted when you read it. And now, I hope, you can consider yourself (almost) as lucky as I have been all of these years.

Here’s a little taste of what you can expect from the e-book:

Christina Katz: Is the future of publishing bleak? Go ahead and tell us. We can take it.

Jane Friedman: The future of paper-book publishing is bleak. Paper books will become talismans, souvenirs, collectors’ items, or something that “paper sniffers” will insist on buying. I don’t buy into all the sentimentalism for paper books, but there will be a cabal of those types—just enough people to ensure that paper books are an enthusiast or niche product, much like vinyl.

The future of writing, reading, and literacy is bright. But it won’t necessarily take the shape YOU want it to. Many people have idealized fantasies about long-form reading and the experience of deep immersion in a book. That’s not dying, but times are changing. We’re becoming a more visual, interactive culture.

Christina Katz: Are there going to be any big money makers in the future of publishing? How about big money losers?

Jane Friedman: There will be far more losers, particularly in the form of start-ups and other new media ventures related to tech trends as well as new models of publishing—everything from e-book and e-publishing distribution services to multimedia apps to community publishing and editing sites.

Anyone whose business is driven solely by selling print books should be nervous, except for antiquarian booksellers. I don’t buy the argument that indie bookstores can now flourish with Borders out of the way—or that Google eBookstore affiliate sales will save them.

Jane Friedman: Frankly, I haven’t seen any demographic that is adapting more quickly or more easily than others. Part of the problem is that anyone working at a “legacy” publisher or agency is tied into working for and saving (to some extent) that legacy structure and business. They’re not positioned well to adapt while working within the demands of that business. People who are able to work outside of it, with models that aren’t dependent on keeping legacy profit margins and revenue models intact, will have an easier time adapting. Read this post that explains the big-picture theory behind this; it’s brilliant.

Christina Katz: Have we reached a tipping point in publishing yet, or is there still a big tipping point yet to come? Can you imagine what will cause it?

Jane Friedman: Some think we reached a tipping point when Barry Eisler turned down a $500K deal from his publisher because he anticipates making more money over the course of his career by self-publishing electronically through Kindle.

It’s not a tipping point, exactly, but it’s a huge wake-up call for established authors. Those who are dissatisfied with their editor and/or agent relationships will more seriously consider abandoning their legacy deals.

The real tipping point is when e-books reach a majority of book sales. No one agrees when this will happen, and some argue that it will happen only within a certain category or genre of books. I do believe that certain genres (e.g., romance, mystery/thriller, science fiction/fantasy) will get to that tipping point first. And, yes, it will probably take longer for the literary work to follow—but not that long.

Christina Katz: You worked for over a decade as an editor and a publisher for Writer’s Digest, and you are also a writer, and now a blogger, professor, and social media maven. So which team are you on? Where do your sympathies lie? Or is the whole idea of “teams” becoming obsolete?

Jane Friedman: I’m not on anyone’s team. I prefer to look at the situation from all perspectives. While I am progressive in my own approach to my career and platform, and advocate that authors use every tool at their disposal to advance their careers, I also empathize with people who don’t want to see the industry change, and have no love for new media. There’s room for all people in the future of publishing, and if you’re the kind of person who wants to only write and publish PAPER books, by god, you’ll be able to find publishing partners and an audience who are OK with that. That’s the magical thing about the world we live in. All the eccentrics can very easily find each other and commune.

That’s why I don’t think the idea of “teams” will ever become obsolete, since that’s part of human nature, and how we all work. But who or what an “author” is, or what defines them—that’s changing.

Christina Katz: Do you believe, as I have heard whispered around the Internet most recently by Russell Jones at O’Reilly Media, that publishers are going to shift from imposing process on to authors to offering services to authors? What does this mean? It’s hard to imagine what this might look like.

Jane Friedman: I read the thread, and I don’t understand why the process they’re describing would be best served up by a traditional publisher—or even if it could be a viable business model.

If an author wants to work with someone who will really be a partner in making their book the best possible book it can be, I’d argue that person is probably an independent contractor—OR we’re looking at a very different kind of company that provides those services, with a different value proposition and business model, than today’s traditional publishers. (I’m thinking of a company like Amazon or Google, or others that have yet to be created.)

The discussion cited above is taking place among people who work within a publishing company. Granted, it’s probably one of the most critical thinking and progressive set of publishing people anywhere in the world, and O’Reilly does more things than just publish books (they do events, online education, etc), but it’s hard to work in that environment and say, “Whelp! Guess we’re not of value any more!” They come close to saying that, to some extent, and that’s where I agree most with their conversation. And it’s why publishers feel anxious. I don’t think publishers will vanish, but there will be a winnowing.

Christina Katz: Should rising writers attempt to self-publish their way to a traditional book deal? Or can this strategy still be held against them by publishing insiders? Or is previously sold content less appealing to traditional publishers?

Jane Friedman: Any publishing insider who continues to look down their nose at self-publishing, especially considering recent news, baffles me. Who are these people? Do they still exist?

Previously sold content is NOT less appealing to traditional publishers. If agents or editors see money in your work, they will want it. Hello, Amanda Hocking? She was a bestselling self-published author. Did that turn off the agent, editor, and publisher who paid her millions? No, they saw even MORE money to be made on her work than what she was able to collect on her own. And that’s the case with just about every self-publishing author who finds success.

Christina Katz: Do you think the day will come when rising writers will turn down traditional book deals because they are doing so well on their own or with publishing teams of their own creation? (Not like Joe Konrath, I am referring to non-traditionally published authors, meaning self-published authors.)

Jane Friedman: Yes, that day is coming. It is already happening. It has the potential to hurt publishers if authors are regularly partnering with companies that work as competitors to publishers, e.g., Amazon. Amazon IS working as a publisher, essentially.

If the traditional publisher is seen as a middleman who provides no value to the editorial, design, or marketing process, then how will publishers attract either rising writers or traditionally published ones who would like to pocket more money, or have more control? Everyone complains that traditional houses don’t edit or market any more. So what do they provide an author who doesn’t want, need, or care about their stamp of approval? Some authors will continue to want that, for sure, but how many will need it? 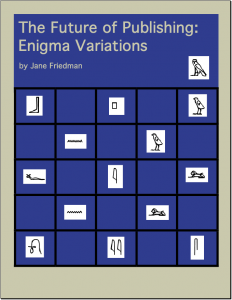 Thanks for purchasing a copy a of “The Future of Publishing: Enigma Variations” on April Fool’s Day. It may just end up being one of the most whimsical and profound things you ever read on the full systems change going on in the publishing industry right now. Let me know if you like it.

As the former publisher and editorial director of Writer’s Digest, Jane Friedman is an industry authority on commercial, literary, and emerging forms of publishing. She has spoken at more than 200 writing events since 2001, and is known within the publishing industry as an innovator, cited by sources such as Publishers Weekly, GalleyCat, PBS, and Mr. Media. She has been a speaker at BookExpo America, an adviser to Digital Book World, and recently served as a panelist for the National Endowment for the Arts, to review 2011 grants in literature.

Jane currently serves as a visiting professor of e-media at the University of Cincinnati, and is a contributing editor to Writer’s Digest.
Since 2008, she’s offered advice for writers at her award-winning blog, There Are No Rules, which receives 50,000 visits every month. She is the author of the Beginning Writer’s Answer Book (Writer’s Digest, 2006), and is working on a new book for writers, forthcoming in 2012.

Next post: Next Round of Classes Begins May 4th & Introducing A New Micro-Publishing Class For Mom Writers