Elizabeth Rusch was very generous with me with her time when I was new in town and working on Writer Mama. Liz is a freelance journalist and prolific children’s book author, most recently of a book called, For The Love of Music. Thanks for helping me welcome, Liz… 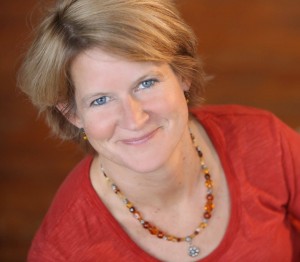 Elizabeth Rusch writes both fiction and nonfiction in the areas of science, art, sports, waves, jokes, crayons, and mud — anything that catches her fancy. She has published more than 100 articles in magazines such as Muse, Read, American Girl, Smithsonian, Harper’s, Mother Jones, and Backpacker. Her children’s books — Generation Fix, A Day with No Crayons, The Planet Hunter, and Will it Blow? — have been honored by Smithsonian magazine, the International Reading Association, Natural History magazine and the Eloise Jarvis McGraw Award in Children’s Literature.  Upcoming titles include The Mighty Mars Rovers, Volcanoes and the Science of Saving Lives, Volcano Rising, and Electrical Wizard. 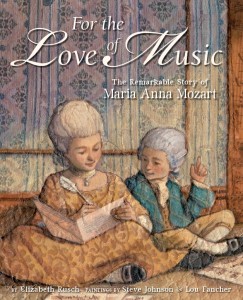 1. How has writing (either just the act of writing or writing this book or both) impacted your self-confidence?

For the Love of Music began more than six years ago as simple curiosity about Wolfgang Mozart’s musical sister, turned into a bit of an obsession, and on publication has become something that I’m really proud to have done. I think perhaps the most challenging projects can be the most rewarding. Now I know I can take an inkling of an idea and through sweat, love and even some tears, turn it into something beautiful.

2. What are three words that describe your creative book-writing process?

3. What good has your book created in the world?

I hope For the Love of Music draws attention to a forgotten musical genius, Maria Anna Mozart, while also inspiring children to make music their whole lives no matter what challenges confront them.

If a book was written about you it would be called: For the love of… (what?). Remember that it’s a story about something that was big in your life. This could either be since you were a child or the story could still be to come. Make it up if you want or imagine your future.

Thanks for participating in the Writer Mama Every-Day-In-May Book Giveaway! Please bring a small crowd next time you come.